Fatena's experiences living in Palestine and now in Belgium have inspired her interest in bringing together writers with diverse backgrounds and experiences. Whether hosting literary gatherings in Belgium or listening to a panel of writers from around the world, Fatena finds that writers thrive personally and creatively through relationships with each other. Her mission to expand these networks was supported by the U.S. Embassy in Belgium which nominated her for the “International Writing Residency Program” at the University of Iowa. 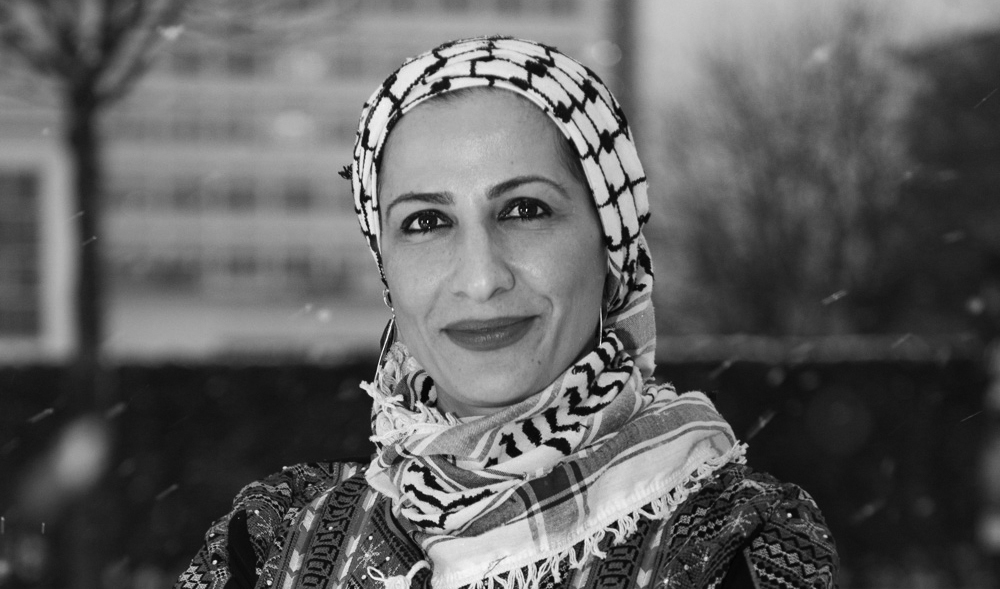 About Fatena “My passion is to write pure poetry from deep down, from the heart.”

Fatena believes that connections with others enriches her writing life. As a poet of the Arab diaspora to Belgium, connection to her rich cultural heritage inspires her. After living in Gaza most of her life, Fatena immigrated to Belgium and became a Belgian citizen in 2016. She has found a balance in living between two cultures.

“As a Palestinian refugee based in Antwerp, I feel both Palestinian and Belgian at the same time,” she explains. “I don’t think it’s necessary to choose between the two. I’m a Palestinian-Belgian or a Belgian-Palestinian.”

A Love of Language

At times, Fatena has felt culturally isolated as she adapts to a new culture, yet she draws strength and inspiration from her cultural heritage. “I love the language and the culture of my homeland,” she says. At the same time, she seeks opportunities to continue learning Dutch in a hands-on way: through “daily communication with the local people in their own language.”

To help other writers who have faced isolation, Fatena started a project called “Fatena’s Poetry Salon.” Drawing from a poetry tradition in Arabic culture, she hosts gatherings where writers – both young talents and those with established careers – read each other’s work, and even help translate it into other languages.

In order to be effective in writing, you need to influence other people.

“Fatena’s Poetry Salon” represents a dream come true. Fatena would even like to expand its reach. “My dream is to see this project become like a real festival,” she says. “I would like to dream big and export this idea outside of Belgium, to other countries, creating exchanges between poets, writers, and musicians – a mix between music and poetry.”

In 2017, Fatena took part in an unforgettable literary gathering. The U.S. Embassy in Belgium nominated her to participate in the “International Writing Residency Program” at the University of Iowa. This program provides writers from around the globe with time to produce literary works while also making them part of the intellectual and social life of the university where they are invited to contribute to literature courses there and across the country.

Fatena says she felt blessed to have the opportunity to have such exchanges with forty-three other writers. It was one of the most important and remarkable experiences of my life. It was great to be among all these different writers and to be exposed to their cultures for an extended period. I was communicating with people in so many ways. At the end of the residency, it was almost like we became family.

“It's great to see how poetry brings us together.”